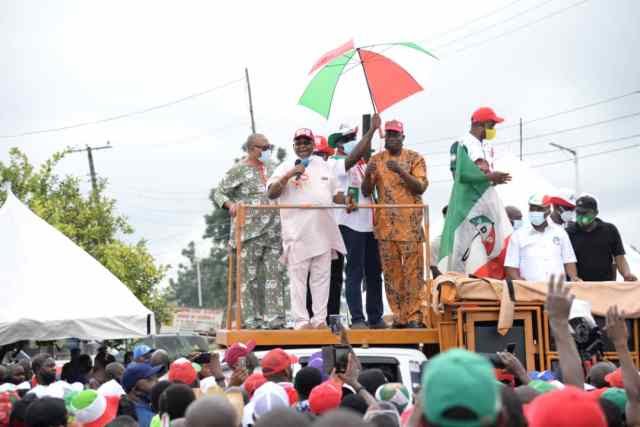 Chairman, South-south Governors’ Forum and Delta State Governor, Dr. Ifeanyi Okowa and the former Vice Presidential candidate of the Peoples Democratic Party (PDP) in the 2019 general elections, Mr. Peter Obi, on Tuesday, applauded the candidate of the PDP and Edo State Governor, Mr. Godwin Obaseki, for providing impactful and purposeful leadership in the state, which they said, has translated to better life for Edo people.https://5356e44bd2643a70dbba1275e44cdc24.safeframe.googlesyndication.com/safeframe/1-0-37/html/container.html?n=0

Okowa and Obi, who joined the governor, his deputy and other members of the Edo PDP Campaign Council at the governor’s reelection campaign rally in Orhionmwon Local Government Area of the state, expressed optimism that Obaseki’s performance and his love for the people of Edo State will ensure the governor’s victory in the September 19, 2020 election.

Addressing PDP supporters, Okowa said Obaseki has done so much for the people of Edo State in the last three years and nine months despite the poor financial status of the state, noting: “I am very convinced that following his performance, the financial status of the state will be better. In the next four years, Obaseki will be able to do more for the people.https://5356e44bd2643a70dbba1275e44cdc24.safeframe.googlesyndication.com/safeframe/1-0-37/html/container.html?n=0

“He is an intelligent man as we rely on his intellect in the Governors’ Forum. Obaseki understands the economy and what the state needs and he is going in that direction. He has created jobs, industries and made people feel important; he has encouraged the people to participate in the governance of the state thereby contributing to the development of the state.”

Okowa said he is confident that the governor will be reelected, noting that “a lot of people will come out on that day to cast and defend their votes to ensure continuity of development in Edo State.”https://d-266128382861637927.ampproject.net/2008150009001/frame.html

On his part, Obi said: “Everybody is proud of Governor Godwin Obaseki because he is doing very well; he must come back to continue his good work for the people.

“He must come back to complete his work; he is doing Edo proud. I can tell you that beyond this state, everybody is proud of him.”

“Everybody is proud of your governor, that is why we are here campaigning for him; we don’t want people that make fake promises and after four years, they will come back to tell you that all they said were political promises.https://5356e44bd2643a70dbba1275e44cdc24.safeframe.googlesyndication.com/safeframe/1-0-37/html/container.html?n=0

“What he (Obaseki) is saying is real and he will do it; he has started the construction of Abudu bridge and will continue to deliver the dividends of democracy to his people,” he assured.

The former Anambra State governor further urged eligible voters across the 18 local government areas of the state to come out en masse on September 19, 2020, and vote for the PDP to enable the governor to consolidate on his landmark achievements across all sectors of the state.https://5356e44bd2643a70dbba1275e44cdc24.safeframe.googlesyndication.com/safeframe/1-0-37/html/container.html?n=0

Meanwhile, Obaseki said: “I thank my brother and colleague from Delta State Dr. Ifeanyi Okowa; we are both Bendelites. I also thank my colleague from the private sector, one of the very few that have succeeded in business and also succeed in politics, Mr Peter Obi.

“People like Okowa and Obi are changing the face of politics in Nigeria and we in Edo have joined them to ensure development continues. We have come home to PDP and will remain in PDP.https://5356e44bd2643a70dbba1275e44cdc24.safeframe.googlesyndication.com/safeframe/1-0-37/html/container.html?n=0

“PDP is a party for all; it brings all people together, ensuring development. The party is a real democratic party where there is no godfather and no one man can dictate for the party. Edo is PDP and the party will banish godfatherism.”

“They say they will bring people with guns to scare us so that we can’t exercise our franchise; they can’t do that. I am the Chief Security Officer of the state and I will protect you.”