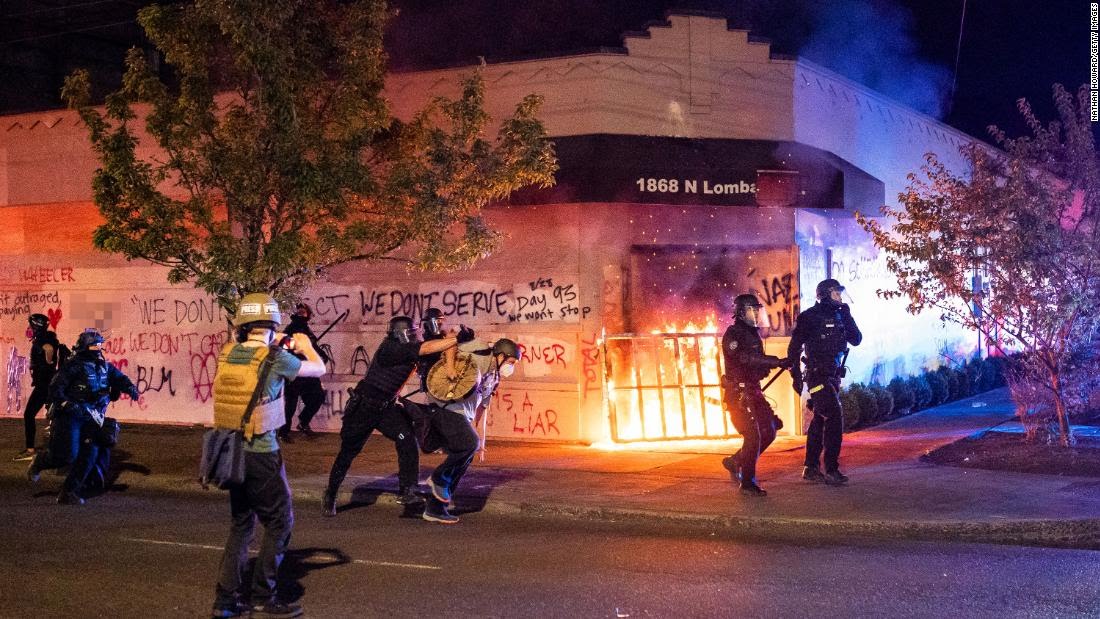 (CNN)More than a day after a man was shot and killed in downtown Portland Saturday night, as President Donald Trump supporters clashed with protesters against police, few details have emerged about what took place.

The Portland police haven’t released any information about the victim. The person was shot in the chest, police said.

Police had no suspect just after the shooting and are asking anyone who witnessed the incident or has first-hand video to contact them.https://9eef642fb85f59e2150541ecf73f892a.safeframe.googlesyndication.com/safeframe/1-0-37/html/container.html?n=0

Police Chief Chuck Lovell urged people to not jump to conclusions about what led up to the shooting.

What happened in Portland Saturday

Protests were taking place, as they have for more than 90 consecutive nights, against racial injustice and police brutality. The protests started with the killing of George Floyd in May and were fueled again by last weekend’s shooting of Jacob Blake in Wisconsin.

After the rally, a line of cars, motorcycles and trucks made its way along the “Trump 2020 cruise rally route” which appeared to include the downtown Portland area, according to an image on a Facebook advertisement of the event.

Portland police were aware of the rally and tried to keep the caravan out of the downtown area, Police Chief Chuck Lovell said at a news conference Sunday, but a group of the vehicles were able to “come into the downtown core.”

The police tweeted Saturday that there had been “some instances of violence between demonstrators and counterdemonstrators.”

Videos posted by a New York Times reporter showed fights breaking out between Trump supporters and the protesters.

A man riding in the bed of a passing black pickup truck displaying a blue “Oregon for Trump” flag and an American flag can be seen pointing and firing a paintball gun at the protesters standing on the corner.1 person is dead after a shooting during protests in downtown Portland

Riders in the black truck can be seen releasing some form of spray.

And as a green pickup truck passes, someone riding in its bed can be seen spraying something toward protesters. Passengers in that green truck duck as the other protesters toss something at them.

The man who died was wearing a hat with the insignia of Patriot Prayer, a far-right group that has clashed with protesters in the past, according to New York Times reporter Mike Baker.

Trump tweeted “Rest In Peace” about the man.

What one witness said

Justin Dunlap, who witnessed the shooting and captured some of it on his Facebook live stream, said he “didn’t hear much lead up to it.”

“I heard like three seconds of yelling and saw a guy spray bear mace,” Dunlap told CNN. “The victim sprayed mace and launched it right into the other guy.”

CNN has not confirmed if the victim is the person who sprayed mace.

“I’ve watched the video 100 times, slow-mo and on my TV, and still don’t know where the shots actually came from,” Dunlap said.

Dunlap said he has been documenting the unrest in Portland since shortly after the George Floyd protests.1 person is dead after a shooting during protests in downtown Portland

“I was in the wrong place at the right time,” he said.”I’m just a citizen journalist. I just want people to know what is going on out here.”

Before the shooting, Dunlap said he saw people who were part of the Trump supporters parade launch mace from the back of their vehicles to protesters walking down the street.

President Donald Trump and Portland Mayor Ted Wheeler sparred in the wake of the shooting, Trump on Twitter and the mayor on camera at a press conference.

“Ted Wheeler, the wacky Radical Left Do Nothing Democrat Mayor of Portland, who has watched great death and destruction of his City during his tenure, thinks this lawless situation should go on forever. Wrong! Portland will never recover with a fool for a Mayor….,” Trump tweeted Sunday afternoon.

“It’s you who have created the hate and the division,” Wheeler said.

“The tragedy of last night cannot be repeated,” Wheeler said. “It doesn’t matter who you are or what your politics are — we have to all stop the violence.”

“It happened in Kenosha. And now, unfortunately, it is happening in Portland, Oregon.”

“But despite the President’s jeers and tweets, this is a matter of life and death. Whether it’s his completely incompetent response to the pandemic, where nearly 200,000 have died, or his outright encouragement of violence in our streets: it should be clear to everyone by now that no one is truly safe with Donald Trump as President,” Brown said.